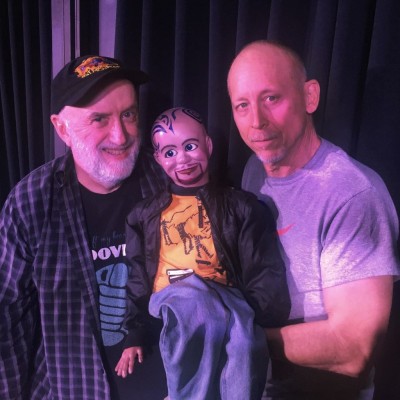 A grown-up who still has the child-like wonder and love for dinosaurs, fossils, science, and paleontology.

The Paleo Nerds Podcast follows Alaskan artist, Ray Troll, and his friend ventriloquist David Strassman, as they host exciting interviews with paleontologists, scientists and fellow paleo nerds from around the world. They take what would’ve been a boring science class and turn it into an exciting party.

Who Are These Nerds?

David Strassman plays with dolls as a ventriloquist, renowned in Australia, the British Commonwealth, and YouTube, residing in California. Ray Troll draws with crayons, his art reaching beyond his home state of Alaska, mostly in the form of fishy creations.

What do these two have in common?  They never lost their love of science, specifically dinosaurs and everything prehistoric. In this podcast, Dave and Ray get together to discuss what it means to be a paleo nerd and on each facinating episode, they reach out to their friends, (who happen to be real paleontologists and scientists), and ask them about their life in science: from how they got here to what they're working on now.

Paleo Nerds is a celebration of science and how learning from the Earth's past can help us understand the present and what to expect in the future.

If you’ve ever loved dinosaurs, you just might be a Paleo Nerd.

Just one example of Dave's charm.

If you didn't believe Ray was obsessed with Helicoprion... Short film by Marc Osborne Jr.