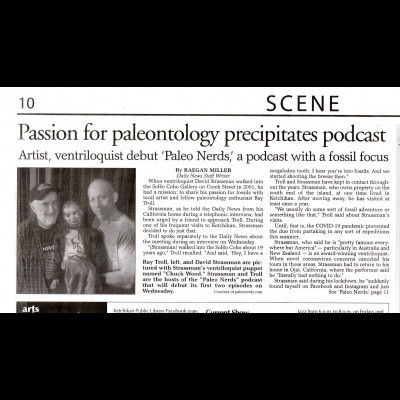 When ventriloquist David Strassman walked into the SoHo Coho Gallery on Creek Street in 2001, he had a mission: to share his passion for fossils with local artist and fellow paleontology enthusiast Ray Troll.

Strassman, as he told the Daily News from his California home during a telephonic interview, had been urged by a friend to approach Troll. During one of his frequent visits to Ketchikan, Strassman decided to do just that.

Troll spoke separately to the Daily News about the meeting during an interview on Wednesday.

"(Strassman) walked into the SoHo Coho about 19 years ago," Troll recalled. "And said, 'Hey, I have a megalodon tooth; I hear you're into fossils. And we started shooting the breeze then."

Troll and Strassman have kept in contact throughout the years. Strassman, who owns property on the south end of the island, at one time lived in Ketchikan. After moving away, he has visited at least once a year.

"We usually do some sort of fossil adventure or something like that," Troll said about Strassman's visits.

Until, that is, the COVID-19 pandemic prevented the duo from partaking in any sort of expeditions this summer.

Strassman, who said he is "pretty famous everywhere but America" — particularly in Australia and New Zealand — is an award-winning ventriloquist.  When novel coronavirus concerns canceled his tours in those areas, Strassman had to return to his home in Ojai, California, where the performer said he "literally had nothing to do."

Strassman said during his lockdown, he "suddenly found myself on Facebook and Instagram and just wasting my time."

Inspiration struck Strassman when he was gazing at a piece of Troll's artwork – which often is influenced by paleontological themes — that hangs in his home.

"I thought, 'Wouldn't it be great if we did a podcast?" Strassman said. "It's always been fun for me to talk to Ray."

Strassman, already a podcast enthusiast, brought the idea to Troll, who was hunkered down against COVID-19 at home in Ketchikan.

"(Strassman) bounced it off me and I was game," Troll said. "He's much more tuned into the world of podcasts than I am, and now I'm more aware of them because I was on one."

The creation that came from the idea is "Paleo Nerds," a podcast that debuts on platforms such as iTunes and Spotify on Wednesday, when the first two episodes of the eight-part season will be made available. Troll's daughter is responsible for the design of the podcast's website.

Throughout the eight-episode season, the two hosts interview seven different professionals and experts in the field of paleontology.

However, the first episode shines a spotlight on Strassman and Troll.

As the topic that led to their friendship, their shared interest in fossils and dinosaurs was a natural theme for their first episode.

"We kind of explore when we all started," Troll said about the opening episode.

"My story is a lifelong story," Troll said. "Age 4, I can remember picking up a crayon and the first thing I drew was a dinosaur."

Troll said that he has been a "'paleo nerd' without any distractions for many years."

For Strassman, the interest also started young — besides ventriloquism, Strassman considers it one of his greatest interests — and now, the performer has come to look at Troll as an expert in the field.

"Ray knows a million times more about paleontology than I do," Strassman said. "And he is kind of like my mentor. My non-scientist, paleo-artist mentor that I can go to as a friend to ask questions."

Even though both are experienced when it comes to paleontology, a podcast was new territory.

Troll said that at the beginning of the production process, he had a "general idea of what podcasts were all about," but has only just begun to "squeeze" the medium into his daily life.

Strassman is an avid listener of science podcasts such as "Science Friday," "Ologies" and even crime podcasts, such as "My Favorite Murder."

Strassman had experience with technical editing from his time editing the visual and audio effects of his performances.

"I thought, 'I could probably edit this,'" Strassman said about learning to supplement the podcast episodes with sounds.

The sounds include original music from Troll and his son, Patrick Troll, in addition to sound supplied by local Russell Wodehouse.

The goal of the podcast was to bring some fun to fossils. Strassman said that many of his favorite podcasts are interesting, but can at times be dry or dull.

"Without fun, you're not going to get the average person to enjoy it," Strassman commented.

Troll said that he believed "Paleo Nerds" holds up in the wide world of podcasts.

"I would dare to say that ours is competitive," Troll said. "You don't have to be a paleo nerd to enjoy it. It's fun, accessible science, and (it's) whimsical, conversational, engaging. ... And really, it's just topics that I think the people will find interesting."