Connie Soja has extensively studied the paleontology of the Alexander terrane, a gigantic crustal fragment that underlies Ray's backyard of Southeast Alaska. In fact, she's reconstructed ancient environments around the globe! 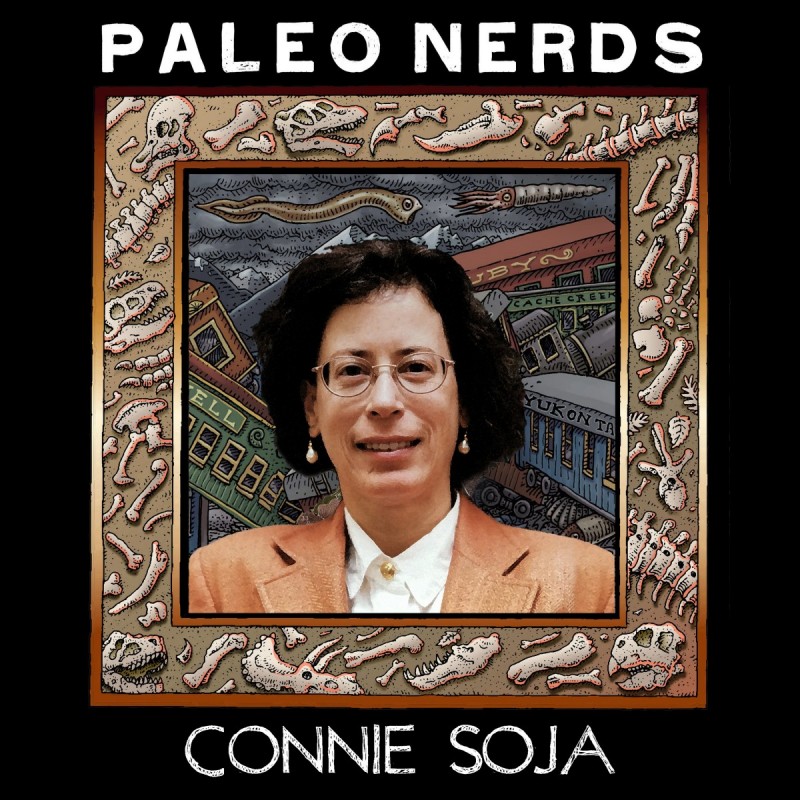 Growing up, Connie spent her summers combing the beaches with her family on Cape Cod. Disappointed by the limited options given to girls on her 8th grade Career Day, Connie selected Funeral Director from the "boy's box" as her career goal.  In some ways, she achieved this goal, for what is a paleontologist but a funeral director for creatures from the past?

Connie saw the prehistoric light thanks to her undergraduate mentor Ken Bork at Denison University and continued her graduate studies at the University of Oregon. Connie ended up in Southeast Alaska through Norm Savage's Conodont research program near Prince of Wales Island. The magical islands in Southeast Alaska that Connie has studied extensively are part of the allochthonous Alexander terrane, and it’s been her goal to use fossils to determine their place of origin. So although Ray is only miles away, his home in Ketchikan is on a completely different geologic terrane from areas to the west.

Dave and Ray made a trip to one of the islands Connie has studied extensively.  They were hunting for trilobites amongst the coral! Video by Keith Wadley.

Alaska is basically a jumble of crustal splinters comprising over 20 different terranes, constructed by Terrane Accretion. Connie uses a grocery belt metaphor to describe this process: the belt (the ocean crust) brings the groceries (terranes) to the cashier (the western edge of North America), the belt subducts under the counter and your groceries obduct to the checker and into the bagging area.  In this analogy, the ancient continental margin is the bagging area, and the groceries including Southeast Alaska’s Alexander terrane, are simply left to accumulate and pile on top of each other.

Learn more about Alaska's unique geology and the Alexander and Wrangellia Terrane.

The questions Connie's work asks are: "What do the fossils reveal about ancient environmental conditions, where the terrane originated and how far did it travel before it became part of Western North America?" To answer these questions, Connie travels the globe looking for a sequence of rocks of Silurian and Devonian age when, after volcanism ceased, the marine shelf (preserved in the Heceta Limestone in Southeast Alaska) was first populated by unique invertebrates including sponges, corals, algae and microbes as well as brachiopods, ostracods, Ammonoids, Nautiloids, and Stromatoporoids (not to be confused with Stromatolites). She compares fossil evidence from this marine environment with similar sites around the world, and Connie uses this to trace where the Alexander terrane was once located.

Connie's research has found that the panhandle of Southeast Alaska was once located in the proto-Arctic ocean basin, close to Western Europe, the Canadian Arctic Islands and Siberia. In the late Silurian, ~420 million years ago, Laurentia (North America) was clustered near the Paleoequator close to Baltica (Western Europe) and Siberia.  Millions of years later as a consequence of large-scale displacement during the Pangea breakup, the Alexander terrane became part of the “terrane-wreck,” joined to the growing continental margin of North America in the late Mesozoic.

One of Connie’s favorite exercises educating undergrads at Colgate University was having students do an in-class dissection so they could discover the Alula of a chicken wing to illustrate evolution.

Paleo News and Movie Reviews: Watch Ammonite and The Dig, Dave contemplates his mortality viewing the Elgin Marbles at the Sutton Hoo and Hoard Room at the British Museum, and the Naked Ammonite