Anyone familiar with Ray's art knows that fish are a focal point and salmon are central, so it's shocking that it's taken so long to have a salmon expert on the show! We're talking spike tooth salmon with Jerry Smith - Dive in! 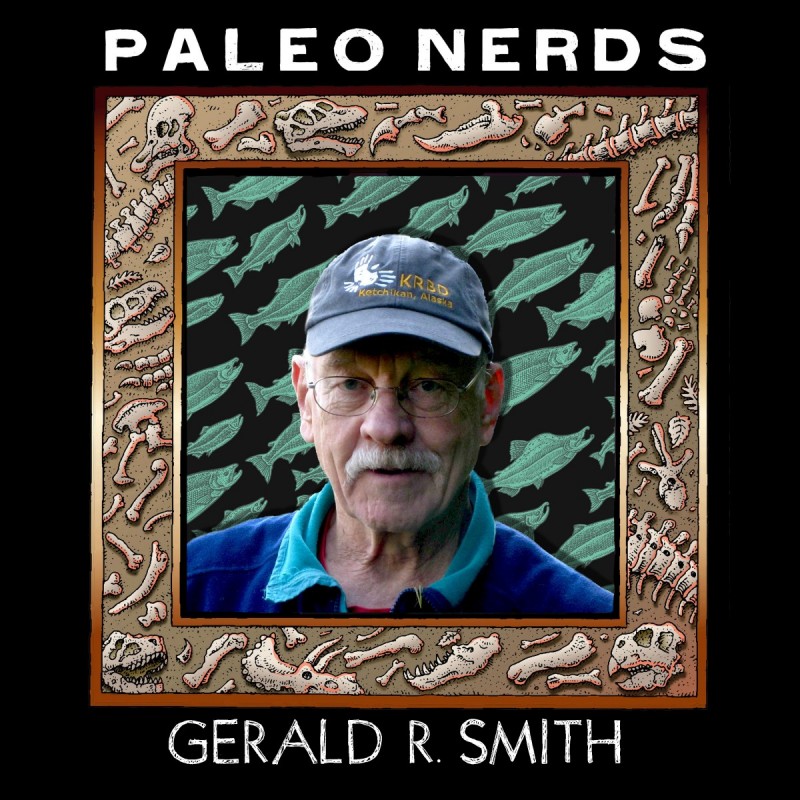 Jerry's been hooked on paleo since working with Claude W. Hibbard at the University of Michigan. There he identified Pleistocene fish bones from the Mt Scott formation, interpreting the paleoecology from the fish fossils. Since then, he's always had a paleontology project going on even well into his retirement as a professor (he has written 95 scientific publications and has been cited over 5,000 times!).
Ray reached out to Jerry years ago because of his work on the "Spike-Toothed" salmon. Originally described by Robert Miller and Ted Cavender who originally thought it was a distinct genus they named Smilodonichthys. Jerry's work built on their discovery and proved that these enormous, spike-toothed fish were true ancestors of modern salmon and correctly classified them as Onchorhynchus rastrosus. He also determined that these fish fed on plankton and used their tusks to defend and compete over their nests. Because these fish have such a rapid growth rate, Jerry is able to conclude that they lived in a very plankton-rich environment.
Read more about Ray's obsession with salmon evolution.
This isn't the only family tree Jerry has restructured. Jerry and his colleague Ralph Stearly correctly classified steelhead/rainbow and cutthroat trout as Onchorhynchus (the genus of Pacific salmon) in 1993. Trout had previously been incorrectly categorized in the genus Salmo, the genus of Atlantic salmon. The former distinction of salmon and trout was whether or not they traveled to sea. However, there have been historical examples of landlocked salmon (like the Kokanee and some Atlantic salmon) and anadromous brown trout who migrate to the sea.
Although Jerry has made many corrections, the salmon family tree is far from complete. The history of salmon speciation is complex thanks to hybridization and is less of a tree with distinct branches (like Ray has illustrated) and more of a webbed lineage of tangled vines. The existence of fertile "chumpies" illustrates that this is possible and David Quammen's book The Tangled Tree discusses this phenomenon in other family trees.
The salmon evolutionary tree has many large gaps between notable species, beginning with the seemingly miraculous appearance of the Eocene's Eosalmo and skipping ahead 20 million years to the Miocene where there are many species of salmon around the world. Scientists like Jerry are working to fill in the "ghost lineage" or those gaps in the fossil record. While some of his colleagues are focused on naming species, Jerry is more concerned with understanding how salmon and freshwater fish evolved.
There were 20 cycles of glaciation in North America in the Pleistocene, and large salmon species would thrive during the cold, wet glacier cycles and suffer through the interglacial periods, eventually becoming too large for the shrinking waterways.
Modern salmon are anadromous (meaning they are born in freshwater and live in the ocean before returning to freshwater) Teleosts (ray-finned fish with distinct jaw function and tail structure), but it's unknown exactly when this behavior developed. To determine whether paleo fish are anadromous or not, Jerry looks at the isotopes in the growth rings of salmon vertebrae. Some fish species have not had contact with the ocean for millions (and millions!) of years.
Earlier this year, Ray did a drawing workshop with Oregon's Museum of Natural and Cultural History, drawing spike tooth salmon with paleontologist Edward Davis.

Paleo News: Geologic hotspots stay in one place while the Earth's tectonic plates move over them. That's how the Hawaiian islands are formed and how the Yellowstone hotspot created  Snake River Plain.

What was that could song I heard?