Episode #49: Raptors Red in Tooth and Claw with Jim Kirkland 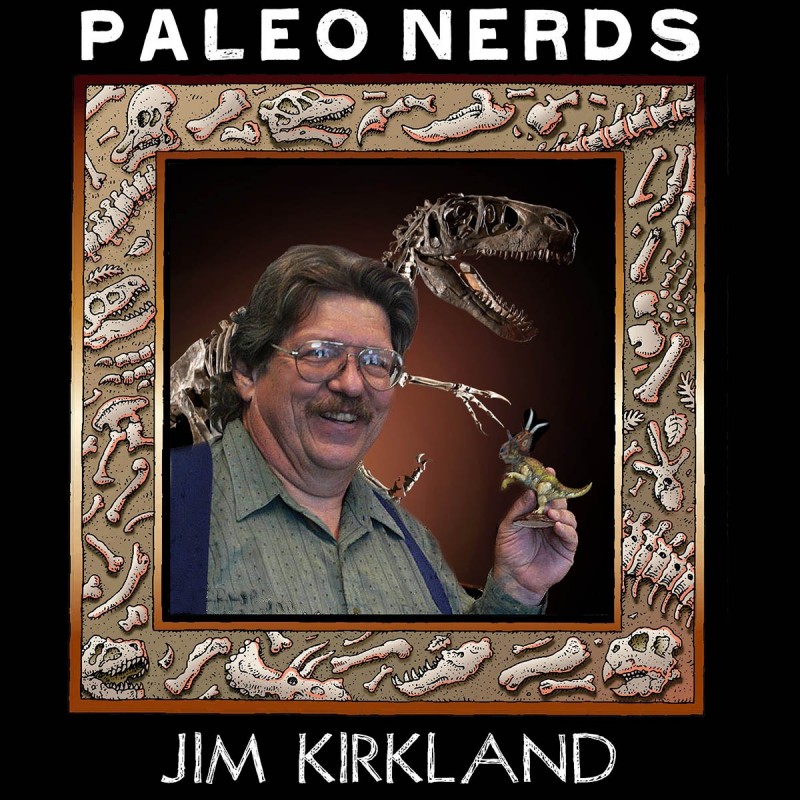 Born in the same year, Ray and Jim Kirkland have an eerie amount of things in common including collecting dinosaur toys from tea and cereal boxes. Jim’s been a Paleo Nerd since the dawn of time, but his high school guidance counselor sent him to study geology at the New Mexico School of Mines. While Jim’s undergrad might have been more heavy on the geology than is necessary for paleontology, it got him out of New England and his geology background only continues to come in handy in his work as a biostratigrapher.

Jim’s work focuses on the Cedar Mountain Formation, where he used dinosaurs as particularly big index fossils for biostratigraphy to work out its remarkable record. Collaborators have helped supplement these conclusions using detrital zircon as a geochronological age model.

In 1991, Jim brought a cast of a HUGE raptor claw to SVP, where he showed an enthusiastic John Ostrom (the paleontologist who discovered Deinonychus - another Dromaeosaur) and this speicimen became the initial holotype of Utahraptor. This discovery validated the size of the “Velociraptors” depicted in the first Jurassic Park movie: true velociraptors are much smaller (think poodle-sized) and at the time of filming, the raptors in Jurassic Park were simply Hollywood imagination. Until Jim found a specimen to match Steven Spielberg’s imagination.

In the time since Jim’s discovery, there have been many many discoveries, bringing the Dromaeosaur tally up to over 40.

Jim has been working passionately on a project for nearly 30 years to bring Utahraptor State Park to life. The park contains a collected 9 ton block of sandstone from Utahraptor Ridge that is almost packed solid with Utahraptors. The block may contain a pack(s) or family of Utahraptors that met their end to quicksand and despite having major scientific impact, this project is not federally or state funded and Jim asked us to share the site’s GoFundme. Besides containing insight into raptor family dynamics, the block contains other species like the Iguanodont, Hippodraco.

The St George site contains layers of monumental ichnofossils including 17 layers of dinosaur tracks, the first fossil swimtracks and and then there’s the “Famous Butt Print.” The site is a fossilized lakeshore and this “Butt Print” records when one decided to take a break. What is phenomenal about this fossil is it shows how dinosaurs curled their forearms medially (contrary to how they’ve been depicted in the movies).

Jim’s described multiple armored dinosaurs (3 more in manuscript!), with Gastonia being his favorite (named for Rob Gaston, a paleo skeletal fabricator - you might remember his shout out for the incredible Hell Pig skull during Scott Foss’ episode). He’s aiming to name 3 more armored dinosaurs, to bring his total of named dinosaur species to an even 26.

Yes, Jim really did write a Star Trek book. And look out for Jim’s paper on fish puke! Yep, you read that right, fossil fish puke! It was identified by John Foster from a spectacular Jurassic plant site that Jim found.

Paleo News: Ray’s been drawing plankton in the style of Ernst Haeckel. While Dave has found himself a new hobby flying remote control airplanes with the Ventura County Comets.
And Dave read an article about swimming sauropods.