The Natural Trap Cave is a sinkhole death trap that contains a pile of fallen mammals that spans over 100,000 years and Julie Meachen has been studying this pile of bones since 2014. 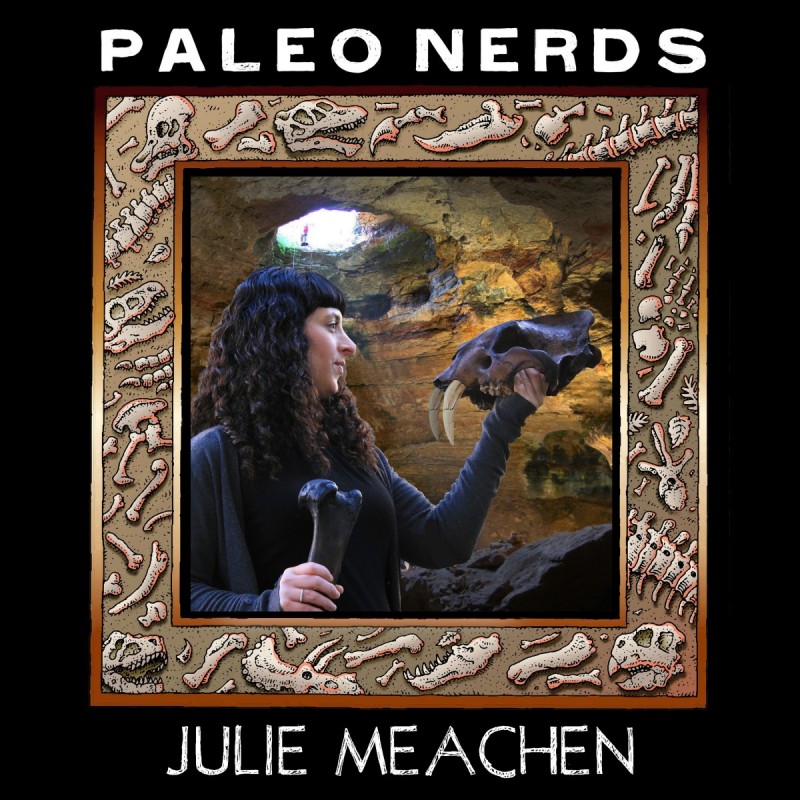 Julie wasn't necessarily a paleo nerd growing up, but she's always been a mammal nerd! Her parents would take her to the Field Museum where she passed by the dinosaurs and was drawn to the taxidermied mammals in the dioramas. She explored the veterinary career path in high school, only to learn that it wasn't the right fit for her. As an undergrad at the University of Florida, she saw an ad for a position in the vertebrate paleontology collection and started volunteering. She also started going out on paleo digs, and on one of her first digs, her team found a giant Eremotherium that is now on display at the Florida Museum of Natural History. She also dug at the Hagerman Fossil Beds - a national monument in the sand dunes of Idaho full of Pliocene mammals.

Currently, Julie teaches at Des Moines University, a medical school, that may seem odd as she's still a practicing paleontologist. Interestingly enough, many current paleontologists and biological anthropologists teach human anatomy because they are constantly immersed in vertebrate anatomy and believe it or not, the anatomy of animals is very similar to that of humans... But any good Paleo Nerd knows that!

Julie's paleo research focuses on the Natural Trap Cave (NTC), a natural death-trap sinkhole that's 80 feet deep. This giant bell-shaped cave formed ~110,000 years ago when the limestone dissolved underneath. The opening is about 20 feet in diameter and is now covered with a giant metal grate. Inside, the cave widens to about the size of a football field and contains over 100,000 years of fallen mammals. Entering and removing specimens from the cave requires a team of expert cavers, as you have to repel into and out of the cave.

Julie is the Co-Primary Investigator of the cave with her colleague Jenny McGuire. Julie focuses on the megafauna (or large mammals) while Jenny studies the microfossils like pollen and Kieren Mitchell works on ancient DNA.

Most of the extractions from the cave were done in the 70s and 80s by Larry Martin and Miles Gilbert who excavated down 9 feet into the mammal death pile. Julie and her team collect mostly from the periphery of the mammal pile. A fun note: way back in his high school days, Ray was hired to make illustrations for Harold Caldwell's educational film strips, and Larry Martin was the first paleontologist that Ray met and the first to give him a critique on the accuracy of his paleontology portrayals.

The cave contains a record of Pleistocene and Holocene mammals including pronghorn, bighorn sheep, lots of horses - both Equus and Haringtonhippus, camels, bison, Bootherium muskox, short-faced bear, wolves - mostly the Beringian wolf with a few dire wolves, American cheetahs and lions, wolverines, foxes , the rare mammoths and a lynx - just to name a few! And yes, creatures do still fall in even through the grate.

Because the deposition of animals and sediment is so deep, it's unknown how far deep the cave goes. Very few animals survived the fall into the cave, but most of the specimens are disarticulated due to water activity from precipitation and ground water.

Some scientists hypothesize that extant pronghorns are so fast because they evolved along with American cheetahs, potentially showing that cheetahs evolved in North America. One of Julie's master's students is currently studying cheetahs, and Julie is currently looking at the geochemistry of cheetahs with her colleague Penny Higgins and has confirmed that cheetahs did in fact, eat pronghorns.

Although they aren't found in the NTC, Julie's done extensive research on the Smilodons at the La Brea Tar Pits - specifically on their arms. Her research shows that these large cats used their arms to pin down their prey, sever the arteries in the neck and wait for the animal to bleed out to enjoy their meal. Unlike other predators, Saber-tooth cats avoided crunching bone as that could have damaged their impressive canines.

Paleo News: Titanokorys, the huge Burgess Shale fossil AKA swimming taco shell with arms that shared the waters with Anomalocaris. Ray is excited that a complete Ptychodus shark specimen has been found after years of being teased by its teeth.