Episode #30 A Deep Dive into Hell's Aquarium with Laura Wilson

Imagine time traveling back to the Western Interior Seaway AKA "Hell's Aquarium." It's a fitting nickname for the shallow marine environment, full of fish with teeth so big they ate differently than modern fish. 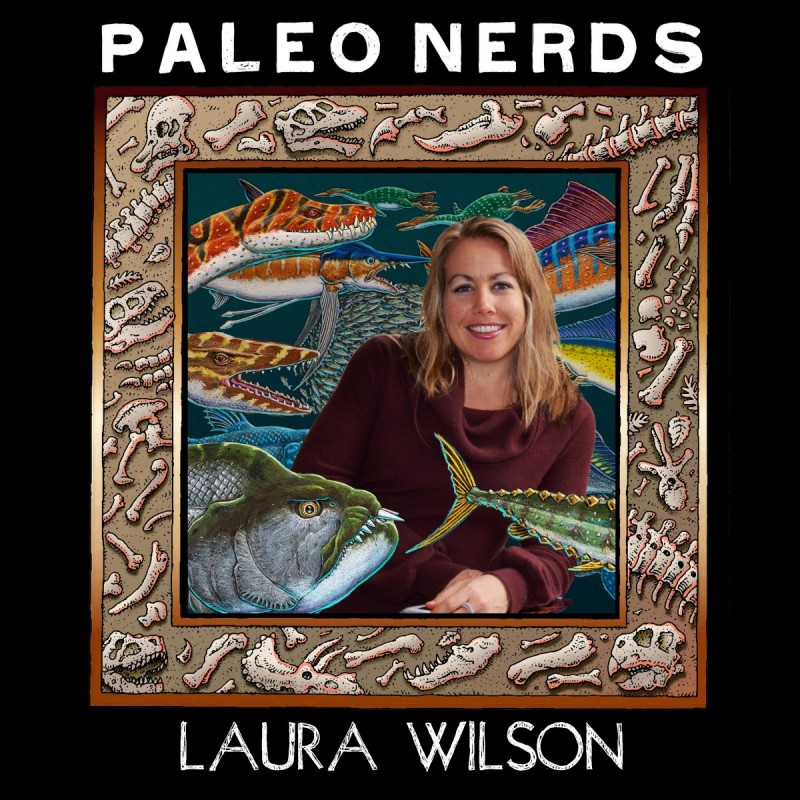 Curator of Paleontology at the Sternberg Museum of Natural History, Associate Professor of Geosciences at Fort Hays State University,

On Summer vacations in Florida, Laura would wake up early in the morning to comb the beach for shark teeth with her dad. She wanted to follow in the footsteps of Eugenie Clark AKA the "Shark Lady." But by 7th grade, the Jurassic Park debut coincided with Laura's introduction to extinction and her first earth science class. She then fell in love with rocks and deep time and became a full-fledged Paleo Nerd!

Laura did her undergrad at Washington Lee University in Lexington, VA to study geology and continue playing Lacrosse.  The one thing missing from her education was a paleontology experience, so she reached out to her old high school teacher who got her connected with Jack Horner and the Museum of the Rockies crew working on the Hell Creek Formation. Listen to Jack's episode!

Laura works on the Western Interior Seaway (WIS), the prehistoric seaway that divided North America after Pangea dispersed in the Mid-Late Cretaceous. Towards the end of the Mesozoic and the Cenozoic, the Eastern side of North America was built but the western side of North America was still being formed. This was the time of the Sevier orogeny, or "mountain building" (which was severe, just not spelled that way) which left basins as a byproduct. All of this geologic activity left the middle of North America below sea level. This area easily flooded as sea level rose due to the formation of underwater mountain ranges during a greenhouse environment with no ice caps.

The WIS is an epicontinental or inland sea, meaning it is an ocean sitting on top of continental crust as opposed to ocean crust. Seas like the WIS are never very deep, reaching only a few hundred meters at its greatest depth. This shallow marine environment is extremely productive because much of it is only ~200 meters deep meaning a majority of the WIS was in the photic zone. The characteristic "chalk rock" that makes Kansas such a fossil-rich environment is actually made up of the calcium carbonate shells of dead photosynthetic plankton (Coccolithophores). This environment created a very soft seafloor with the only hard part of the seafloor being giant Inoceramus clams but also created a perfect pillow to beautifully preserve dead mosasaurs as they drifted down to their final resting place. Listen to Chuck Bonner's episode to learn how his family has been excavating fossils from this fossiliferous environment!

The WIS was first fed freshwater first from the Sevier orogeny and then the Laramide orogeny, eventually becoming brackish as freshwater continued to mingle with marine water, and eventually, it dried up as North America settled into its current form. Laura traces the Western Interior Seaway through the rocks like the Dakota Sandstone formation, a record of the beaches lining this shallow marine environment.

Laura also works with marine reptiles like sea turtles and uses histology to connect them to their environment (Listen to Holly Woodward's episode to learn more about histology!). Laura uses the vast understanding of modern sea turtles to reconstruct the lives of prehistoric turtles like the giant Protostega (3 meters!) and the even bigger Archelon (4 meters!). The term gigantothermy was coined to describe the extant leatherback sea turtles (2 meters!) and has since been applied to dinosaurs as well.

While Laura was working on her Ph.D. with Karen Chin at the University of Colorado Boulder, she began comparing Cretaceous Hesperorniforms found both in the Arctic and Kansas to modern penguins as an ecological equivalent in terms of migration. Histology can show annual cyclical patterns that could infer migration OR winter starvation. This is where Laura pulled from migratory and nonmigratory modern penguins to see if you could see histological signs of migration.

Laura runs the Wilson Paleontology Lab at Fort Hays State University where students conduct their own research. Some of her students worked on the convergent evolution of Xiphactinus and the extant tarpon as well as the Protosphyraena and modern swordfish. Unfortunately, the reality is Xiphactinus and Protosphyraena had such big teeth, they simply don't suck like modern fish (watch your goldfish suck in its food!).

Paleo News: Dave and his son, Carson, visited Death Valley, one of the lowest points on Earth. He used the Mancos App to see what they were standing on in the Argus Range Wilderness, part of Basin and Range Country. Unfortunately, the rock was too cooked to find fossils. They also visited the Trona Pinnacle Spires.