Episode #33 The Sistine Chapel of Dinosaurs with ReBecca Hunt-Foster

ReBecca Hunt-Foster is the Park Paleontologist at the Dinosaur National Monument. Yes, she has the iconic park ranger hat, but she spends her time tracing the footsteps of the dinos that walked Utah in the Late Jurassic. 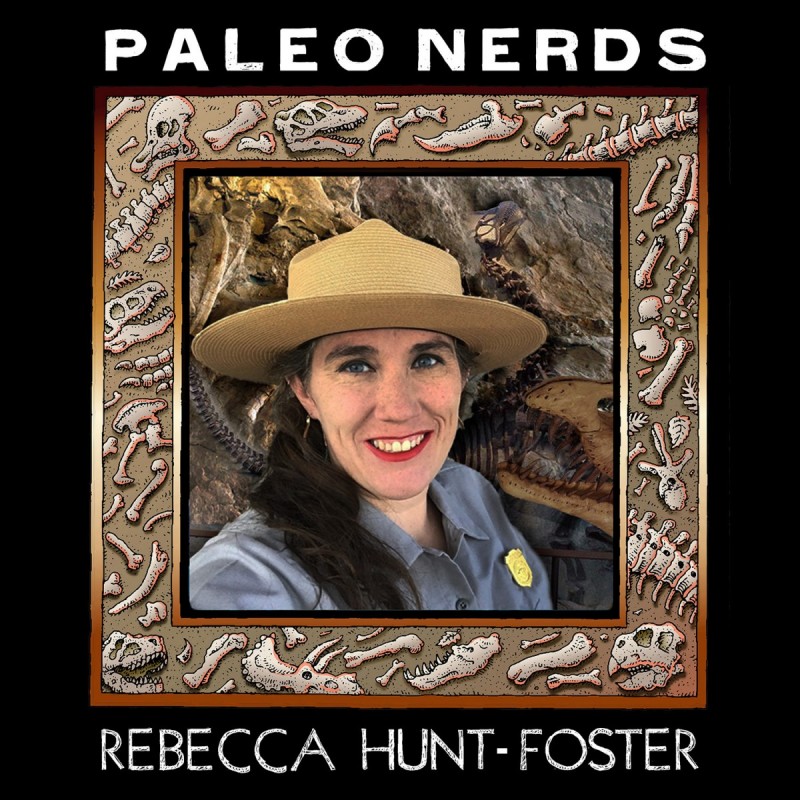 As a teenager, ReBecca's mom (a librarian) brought home Jack Horner's Digging Dinosaurs. Unlike kids these days who may be able to contact their heroes via email or social media, ReBecca wrote letters to the authors of her favorite books, tracking down their addresses through local paleontology journals. By the time she was 14 she had quite the network and was invited on her first dig with Carson Davis.

ReBecca described the only dinosaur found in Arkansas (the official Arkansas state dinosaur!) as an undergraduate at the University of Arkansas. Arkansaurus fridayi was originally discovered by Joe B. Friday while looking for a lost cow. Although the specimen was only a few toe and foot bones, professor James H. Quinn knew they belonged to a dinosaur. Because of his untimely death, the specimen sat undescribed for years before ReBecca began working on them with her DNM predecessor Dan Chure and longtime mentor Dr. Davis. In the Early Cretaceous, Arkansas was on the coast of Appalachia which was still connected to Laramidia, so this specimen a possible "float and bloat" (when an animal dies on the shore and floats out to sea before falling to the ocean floor).

After grad school, ReBecca found a job at Augustana College as a research assistant to Dr. Bill Hammer where she spent a few years preparing Cryolophosaurus (the Antarctic Theropod with a party hat). As a preparator she removed hundreds of pounds of hard rock from the delicate bones, allowing researchers to fully study the bones. Her work on this specimen even got her a trip to Tokyo!

ReBecca has worked extensively on dinosaur tracks, specifically the Mail Station Trackways (Click to read her fascinating paper!). Dinosaur tracks are ichnofossils (A fancy word for trace fossils), so they are limited in how specific they can be defined. Because of this, there is a whole separate taxonomy or Ichnotaxon. So Eubrontes is a very well-described dinosaur found around the world that doesn't exist. ReBecca believes that Eubrontes is most likely a large theropod like Dilophosaurus while the smaller ichnofossil Grallator is most likely related to Coelophysis. ReBecca can tell from a footprint how fast an individual dinosaur was running, which direction it was going and any pathologies that might impact its tracks (like missing a toe or a limp). While most ichnofossils can't be directly connected to the creature that made them, there is a theropod footprint associated with a foot specimen!

ReBecca is now a Park Paleontologist at the Dinosaur National Monument, home of the Quarry Wall of Dinosaurs, the Paleo Nerd's version of the Sistine Chapel. This monumental chunk of the Morrison Formation records the tragic result of a temporary drought experienced by a population of dinosaurs living in a river habitat in the Late Jurassic. This drought-related die-off is recorded at least 3 times in the wall itself. ReBecca's favorite specimen from the wall is a juvenile Allosaurus leg but there are so many incredibly preserved dino specimens and even more mammals known from Dinosaur National Monument!

ReBecca's been working on a Brachiosaurus specimen (a rare treat in the Morrison formation!) that began with the discovery of the second largest Brachiosaur humerus ever found - so big it had to be extracted with Clydesdale horses (just like in the Valley of Gwangi, an old favorite of Ray's). Although ReBecca's work focuses on exciting megafauna dinosaurs, Stromatolites hold a special place in her heart. That larger mega-mega dinosaur she'd like to see is Torosaurus (not to be confused with Torvosaurus, Ray!).

Paleontology is a family affair for ReBecca and her husband John Foster, an expert on the Morrison Formation. Her daughter has already picked up the Paleo Nerd skills from her parents and her younger brother is not far behind.

At Dinosaur National Monument, ReBecca is surrounded by the works of Ernest Untermann, who may or may not be an influence on Ray's work.

Volunteer for Dinosaur National Monument!! If you want to make a road trip out of your visit, we know a guy who draws maps featuring fossil sites all over North America (and we don't mean John Wesley Powell!).