Episode #35 Painting the Living Science of Paleontology with William Stout

Seeing dinosaurs on the silver screen made Bill Stout a Paleo Nerd, so it's only fitting that he started his art career illustrating movie posters. His work spans from comic books to murals and has brought him all the way to Antarctica. 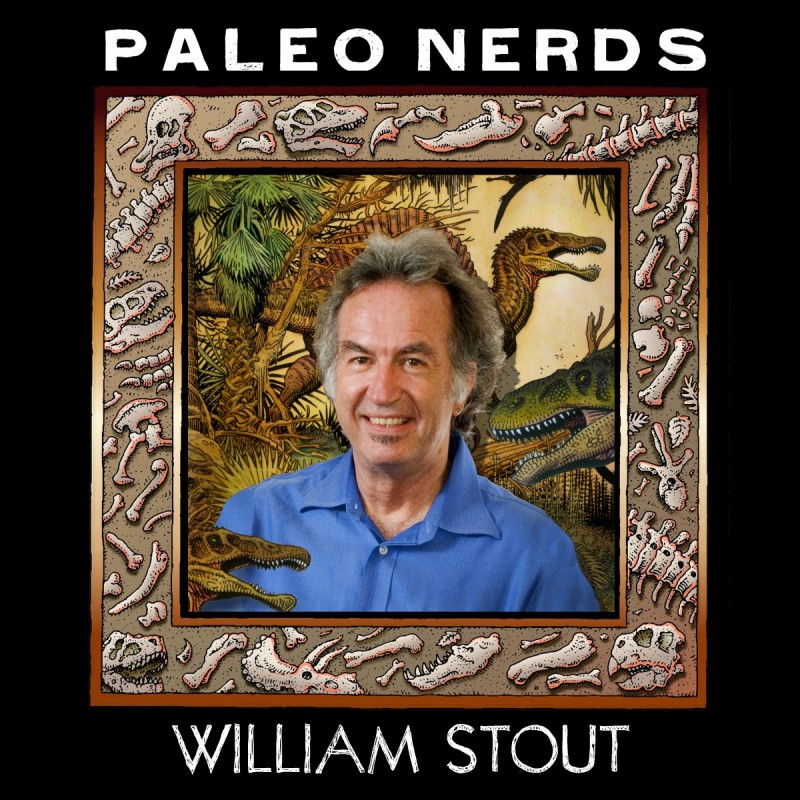 Paleo Artist for the Society of Vertebrate Paleontology

William "Bill" Stout became a Paleo Nerd in 1952 when his parents took him to see his first movie, the revival showing of the 1933 King Kong. Soon after, young Bill saw Fantasia's Rite of Spring sequence and there was no turning back. Then in 5th grade, Bill's teacher caught him drawing dinosaurs in class. Instead of punishing him for not paying attention, his teacher, Elliot Wittenberg, encouraged young Bill to draw anatomical models for the class. Bill later dedicated one of his books to Mr. Wittenberg.

Bill was on a path to be a doctor but switched directions after a discouraging move in high school that shifted him away from academics to focus on art. Bill was drawn to the Chouinard Art Institute when he found out psychedelic icon Rick Griffin was an alumnus, Disney's infamous "Nine Old Men" ran the animation department, and Edith Head ran the fashion department. It was an incredible time to live and study art in Los Angeles, and Bill soaked up the creativity.

Bill's first gig was illustrating the cover of Coven 13, and he also did early advertisements for Toyota, Taco Bell before he started working with his mentor Russ Manning (thanks inadvertently to the discovery of an unpublished novel by Edgar R. Burroughs illustrated by Jeff Jones which Bill disliked so much he made 4 different alternate illustrations that were later published in the fanzine ERB-dom). More "comic book" artists you definitely should know: Frank Frazetta, Roy Krenkel, Al Williamson. Bill inks his comics with a Winsor & Newton Series 7 #1 brush and India ink.

Bill subscribes to the "William Stout Pinball School of Career Planning" or a slow rise to success built by following one's creative impulses as opposed to getting stuck creating works that simply appeal to the masses for a quick payoff.

In the 1970s, Bill was busy creating movie posters but was tempted to dabble in films by Ron Cobb beginning with Conan the Barbarian. Impressed by his work in Heavy Metal, Bill got the job and his two-week position turned into a two-year gig, sharing an office space with Steven Spielberg and even helping with storyboards for Raiders of the Lost Ark.

Bill has designed theatrical creatures like Edgar the Bug from Men in Black and the Faun creature for Pan's Labyrinth. He's also painted prolific murals on the walls of museums, zoos and theme parks around the world including "Plein Air" paintings. Bill worked with San Diego paleontologist Lynette Gillette as his advisor for his large-scale oil paintings that cover the walls of the San Diego Natural History Museum.

In 1981, Bill's book The Dinosaurs, A Fantastic New View of a Lost Era became a reality when he was asked to update 4 entries in Don Glut's Dinosaur Dictionary. To accurately illustrate these species Bill joined the Society of Vertebrate Paleontology and began communicating with paleontologists and illustrating active discoveries.

Bill was the "biggest movie nut you'd never want to meet," frequenting movie marathons and seeing every film that graced the silver screen.  One day, on his way to the theater, Bill's friend stopped him on the street and mocked his choice to spend two hours in the dark when he could be out adventuring. So Bill began seeking adventures around the world.

In 1989, photographers were still struggling to capture Antarctica because of the interference the low temperature had on film. So Bill joined an expedition to Antarctica sponsored by the American Museum of Natural History in New York. There he set up his canvas to capture the electric landscape of Antarctica. Bill has been working with the Antarctic Southern Ocean Coalition with the goal to make Antarctica the first park for the entire world and he's still adding to his collection of Antarctic paintings. His first one-man show at the Natural History Museum of LA consisted of 45 paintings depicting life in Antarctica from prehistoric times up to present day and he's hoping to compile 100 paintings in a book.

Paleo News: The Late Cretaceous bat-winged shark Aquilolamna was only tentatively assigned as a lamniform but is lacking pelvic fins like the Eugeneodontids (like Helicoprion, Edestus and Squatinactis) indicating that there are some missing links yet to be discovered in the shark family tree.