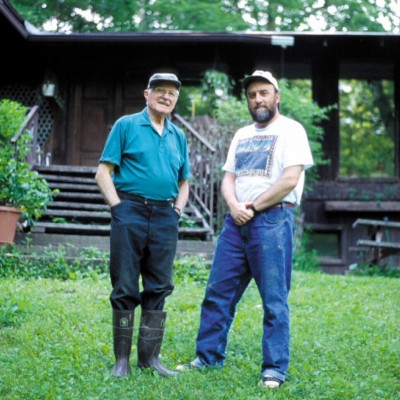 My friend and mentor, Rainer Zangerl, PhD, died last year at age 92. He was appointed as curator of fossil reptiles at The Field Museum in 1945, and served as the geology department’s chair from 1962 until his retirement in 1974.

I’m a fish-obsessed artist living in Alaska, so it’s unusual that I would befriend a retired scientist liv- ing on an Indiana farm. But when your work leads to the obscure netherworld of prehistoric sharks, there are only a handful of people to turn to.

I saw a profoundly puzzling fossil shark at the Natural History Museum of Los Angeles County in 1993. Helicoprion looks like a spiral snail shell at first, but a closer look reveals finely serrated shark teeth that decrease in size as the coil winds inward. I wondered how the teeth grew and how it ate, yet

Dr. Zangerl told me about even weirder sharks that once inhabited North America, and I began drawing them. I visited him in 1994, an unforget- table time discussing the wonders of life on our planet, eating his tasty homemade bread, and hunt- ing for fossils in his front yard. (Not surprisingly, Dr. Zangerl had built his home on a great fossil deposit.)

Dr. Zangerl emigrated from Switzerland in
1939. He had a wonderful way with words, trilling his Rs and describing ancient sharks as “fierce cr-r- r-itters.” He published more than 60 scientific papers on a variety of subjects and wrote a now- classic memoir on the Pennsylvanian black shales that permeate the Midwest. Over a steak dinner at a roadside diner, he casually mentioned that he had translated Willi Hennig’s Phylogenetic Systematics with a friend in the 1960s—triggering a revolution in systematic biology.

Dr. Zangerl pointed out several Indiana quarries where he had split thousands of rocks in search of ancient life. Like a 5-year-old school kid at the master’s knee, I asked which was his favorite of all the fantastic animals he had discovered.Without hesitation he said, “Ornithoprion, a very strange cr-r-r-itter indeed. It had a pointed snout and a lower jaw shaped like a bony probe.All we ever found was the head, but what a head it was!”

Inspired by my sojourn to old “Dr. Z,” I drew like a madman back in Alaska and took extra care in reconstructing Ornithoprion. I sent him some copies and cautiously called a week later. “Well, um ... what did you think of the drawing?” I asked. “It’s absolutely perfect. You really brought zat cr-r- r-itter to life,” he trilled. Now, every time I look at that drawing, I remember my pal, Dr. R-r-r-ainer Zanger-r-r-l, and smile.