Episode #40 Who Dung It? with Karen Chin

Coprolites (or fossil poop to the layman) have come up repeatedly on the show so we are thrilled to finally have the Queen of Coprolites herself on the show! Karen Chin can interpret entire lifestyles from a thin slice of paleo dung. 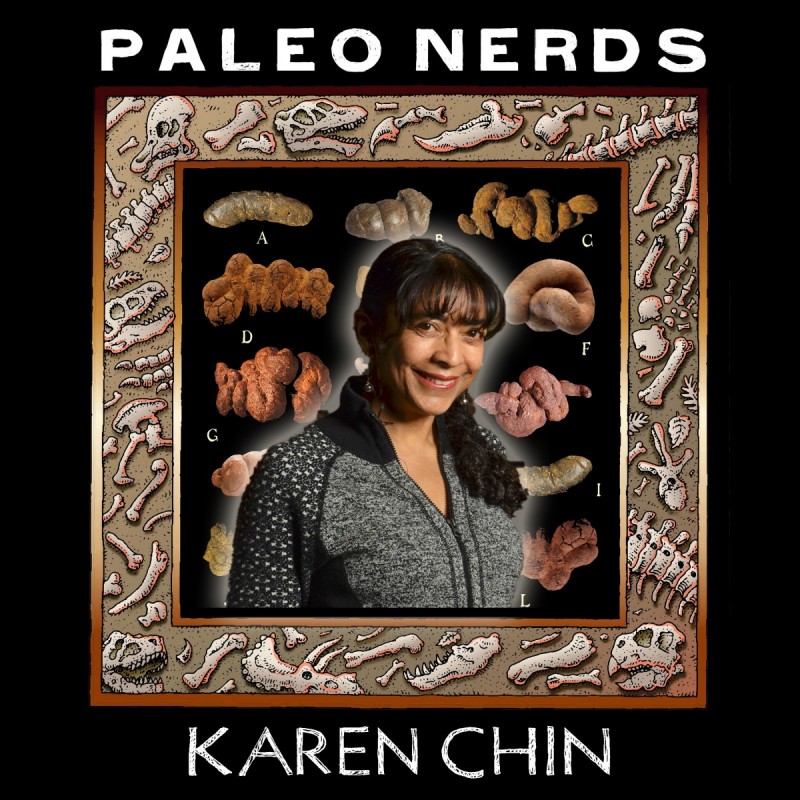 Professor & Curator of Paleontology at the University of Colorado Boulder

Although Karen grew out of her childhood dinosaur phase, the Paleo Nerd gene can only stay dormant for so long. As a graduate student working on plant ecology, Karen met Jack Horner at the Museum of the Rockies. Jack offered her a job prepping dinosaur bones and Fossil Fever took over. Her work with Jack brought her to the infamous "Egg Mountain," where unlike most of her colleagues, Karen looked over the nesting hadrosaurs and became curious about the weird rocks full of plant material or the "Magic Packages" also known as dinosaur feces (formally known as coprolites). Karen then applied the analytical methods she had been using on bones to the fossil feces, studying their histology, or microscopic structure.

Karen learned about ancient vertebrates from her work with Jack, but her doctoral advisor, paleobotanist Bruce Tiffney opened her eyes to the fossil record of ancient plants. Thanks to Bruce, Karen's work is interdisciplinary (combining vertebrate paleontology and paleobotany) and Bruce helped her bridge the gap between the two. Karen's work as an Interpretive Park Ranger has also influenced her interdisciplinary approach, comparing the extant to the extinct - not something most people think about when they stumble upon a "Magic Package" left by a bear in the woods.

Logically, coprolites contain a record of what a specific creature ate and there are chemical trends associated with different eating habits. Animal tissues contain more phosphorous than plants, so the coprolites of carnivores are minerally rich and better preserved (and therefore more common) than those of plant-eating herbivores. Because a coprolite only contains the record of one or two meals and is specific to that individual's diet, it is important to look at many coprolites from the same location to get a reasonable idea of what the population ate in a more generalized sense.

The coprolites of the Maiasaura at "Egg Mountain" (the nickname of an important exposure of the Two Medicine Formation) are a little bigger than a basketball and are filled with fragmented conifer wood with no evidence of leaf tissue. 10 years after she observed these coprolites, Karen had an epiphany that the wood she was observing in these specimens was unusually broken down. Cellulose and lignin (the organic compounds that give wood it's rigid structure) are difficult or impossible to break down in the average stomach, so Karen inferred that these hadrosaurs were eating rotting wood, similar to cattle in Chile. Amazonian armored catfish do eat trees, but they use their jaws (yes, plural!) to grind the wood into digestible fragments.

You've probably observed that a rotting log is softer than a living tree. This is because fungi, bacteria and other organisms have broken down the rigid compounds making cellulose more readily available. But Karen hypothesizes that the hadrosaurs at Egg Mountain were not just after the cellulose.  The herbivorous diet of a maiasaur doesn't naturally include a lot of animal protein, so Karen hypothesizes that these large (25-foot!) dinos were also after the protein from insects, especially while producing eggs. Karen has found supporting evidence in the Kaiparowits Formation, where similar coprolites contained fragments of crustaceans, supporting her hypothesis that herbivorous dinosaurs did rely on invertebrates to round out their diets.

And then there a carnivores coprolites... Karen has published papers on a T. rex coprolite from the Frenchman formation and she spent many a sleepless night analyzing a 7-liter, 75-million-year old tyrannosaur coprolite from Dinosaur Provincial Park. Finally, she serendipitously took a slice of this specimen at just the right location and she could see the striations of muscle tissue of this carnivore's last meal!

So who dung it? While Karen can often narrow down the possible "poopetrator" based on proximity to a skeleton, coprolites, like footprints and burrows are trace fossils, meaning it's nearly impossible to directly link them to the individual or species that produced them. Evidence of coprolites has been found as early as the Cambrian.

There are in fact several exhibits on coprolites and unfossilized poo, like the Poozeum, the National Poo Museum, and the traveling "Scoop on Poop."

And yes, the story of a coprophagic bear is true. (Coprophage = $#!*-eating organisms)

Paleo News: "Zombie" ant found in 50 million-year-old amber, Dave and Ray are both reading Locked in Time by Dean Lomax