This episode of Paleo Nerds is truly out of this world! The Nerds talk to Kenneth Williford, Deputy Project Scientist for the Mars 2020 Perseverance mission. Blast off to the martian past! 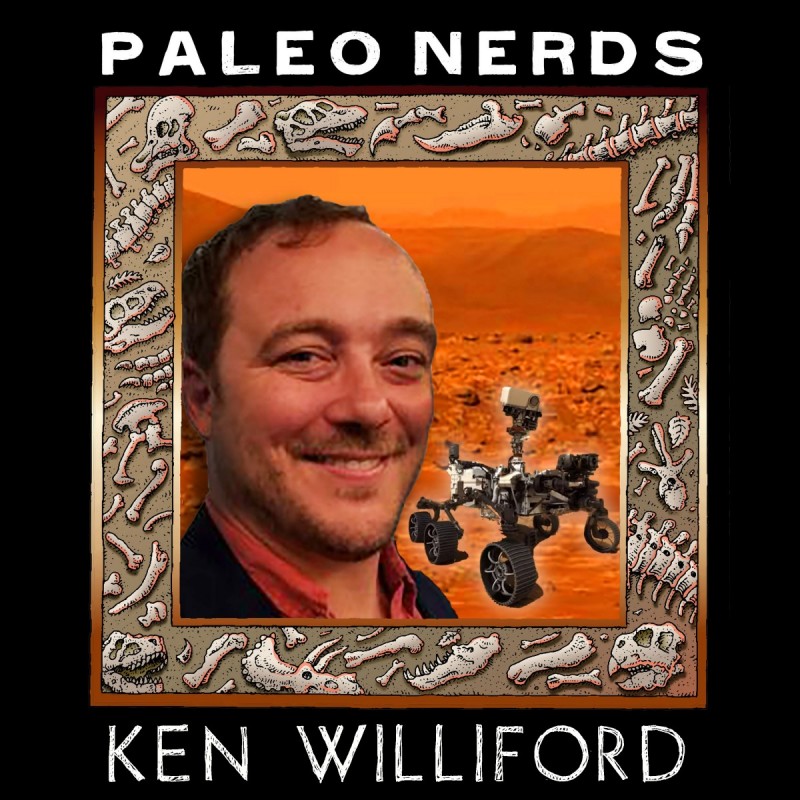 Like any kid, Ken loved dinosaurs. But the first time Ken snorkeled on a coral reef, he was struck by the overwhelming desire to understand life in general. Like any Paleo Nerd, Ken knew he couldn't understand the present without looking to the past and thus his journey into paleontology began. Who knew it would take him to other worlds!

Ken's work as a paleontologist focuses on the oldest record of life on Earth. The age of the Earth was determined from the Canyon Diablo Troilite. The oldest Earth material is Zircon sand grains collected from Australia's Jack Hills formed in a stream bed 4.4 billion years ago. Because of Earth's constantly morphing crust, there are very few places on Earth where rocks haven't been heavily metamorphosized. It's not until 3.5 billion years ago that stromatolites were preserved which tells us that life in its most basic form was well-established by then.

Ken has worked with previous guest Peter Ward on the Triassic-Jurassic boundary preserved on Haida Gwai, an island archipelago off Canada's pacific coast. Pangea formed at the Permian-Triassic boundary and disintegrated around the Triassic-Jurassic boundary and these boundaries also coincide with 2 of the 5 notable mass extinction events. Unlike the other 5, these 2 mass extinction events were not caused by an impact event (like the infamous asteroid that brought an end to the Cretaceous) making it impossible to pinpoint exactly why extinction occurred at such a massive scale. The extinction of the Tr-J and P-T boundaries was most likely caused by the multitude of environmental changes that accompanied the formation and disintegration of Pangea.

So how did Ken end up searching for fossils on Mars? Although previous missions to Mars have always been on the lookout for evidence of life, the Perseverance rover is specifically equipped and intended to gather possible evidence of ancient life, specifically fossils similar to those that Ken has studied on our home planet.

Searching for life on Mars is very much like searching for a needle in a haystack, so NASA went through a 5-year process, allowing for scientists from all over the world to weigh in on where life might be. Because of this, Ken is very confident that if fossil evidence of life exists on Mars, it's very likely that he'll find it in the Jezero Crater.

The geologic history of Mars is divided into 4 broad segments based on the rate of impact crater density: the Pre-Noachian, the Noachian, the Hesperian and the Amazonian from oldest to most recent. The Jezero Crater is the geographic scar left from a large impact dating to the Noachian-Hesperian boundary. NASA has been working with the Navajo people to name notable geographic locations and rocks.

The Mars 2020 Mission Perseverence Rover is equipped with a SuperCam - a device that uses remote optical measurements and laser spectroscopy to determine fine-scale mineralogy, chemistry, and atomic and molecular composition of samples it encounters. In layman's terms - it shoots lasers at rocks and sends the info back to Earth where Ken interprets the data. LIBS (laser-induced breakdown spectroscopy) sends the elemental composition of a sample and the Raman Spectrometer sends the molecular composition and mineralogy. SuperCam scans from a distance, looking for good places to park and deploy SHERLOC and PIXL to take a closer look.

Explore the Peseverence Rover in 3D!

A CHNOPS analysis (Carbon, Hydrogen, Nitrogen, Oxygen, Phosphorous and Sulfur) tests for the vital elements needed for life (as we know it on Earth). Jezero contains carbonate minerals, like the carbonates that make of coral reefs, which is a good indication of life.

All of these scientific readings allow Ken and his team to narrow down the best possible location from which to collect samples - areas that have the best possibility of containing evidence of ancient life. This is important because of the extreme time and resources it takes for samples to travel back to Ken's lab. At the time of recording, Perseverence has been probing rocks for 5 months, so Ken has lots of data to slog through before a sample is collected and sent back to Earth.

Watch the NOVA special on the Mars 2020 mission

Looking to win a Paleo Nerds t-shirt? Head to our Facebook page!