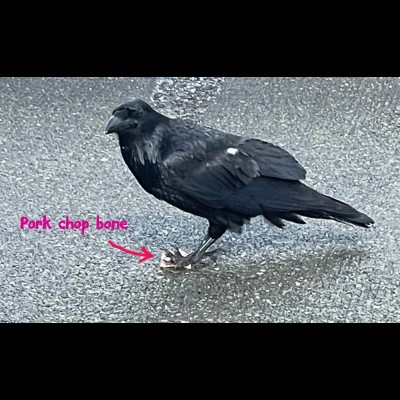 Ray summarizes his raven "experiment" in an email to John Marzluff on April 15th, 2021.

My experiment in feeding ravens has been going on for four months now and they definitely know me as I walk through town. You said it would be pretty special if one of them gave me a gift.

Well, the other day one that I’ve named Huggin landed ten feet in front of me, out of the blue, with something in its talons. As I slowly walked toward Huggin he strolled away and watched as I picked it up. It was a pork chop bone.

We exchanged looks, he didn’t fly off.. he just watched me. I said thank you and walked away smiling. I’m not sure if he was saying "thank you here’s a little something for you" OR .. if he was trying to say he wanted more bones and less peanuts. ( I switch it up)

So the next day I left him a pork chop bone with lots of gristle. He’s got a white spot on his side so he’s easy to spot.

The crows have noticed my almost daily raven feeding and often times one will show up and loudly CAW to his buddies for backup. Sometimes the mob shows up and takes on the ravens.

Other times the solitary crow ( I’ve since found out his name is Heckyl) shows up solo and purrs like a cat..and makes tapping sounds. I recorded him the other day doing just that. So I gave him a peanut for his performance. He was about three feet away perched on a parking sign.