Episode #36 The Call of the Parasaurolophus with Ashley Hall

Ashley Hall has been obsessed with dinosaurs since she was a kid and now she spends her days educating the public at the Museum of the Rockies. She makes fossils fun! 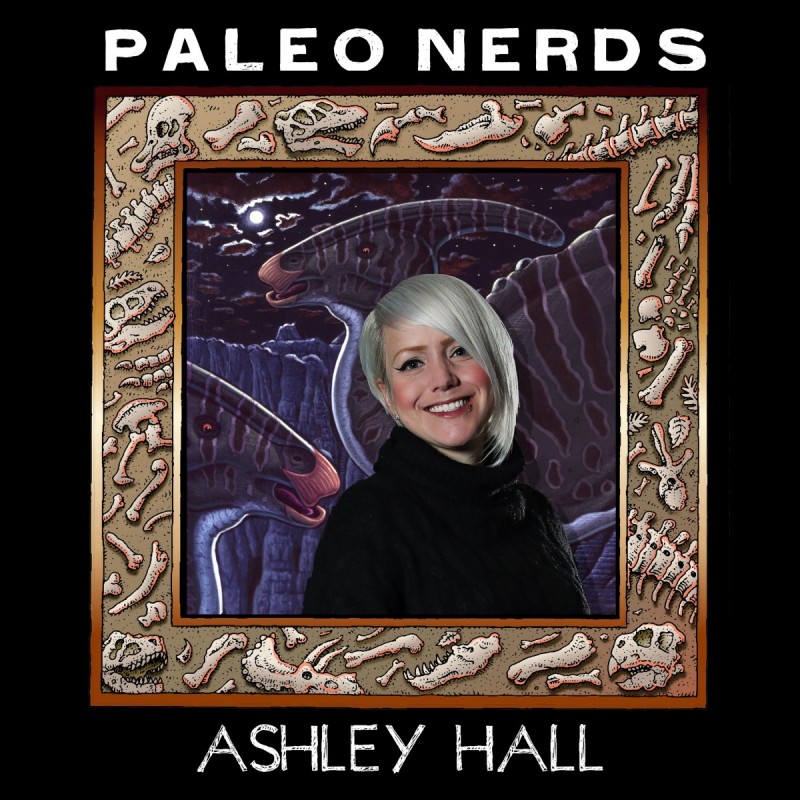 Outreach Program Manager at Museum of the Rockies

In case you don't believe Ashely is a Paleo Nerd, she's got permanent proof inked on her arm, an homage to her favorite dino Parasaurolophus (the most beautiful hadrosaur according to Ashley). She grew up in South Bend, Indiana where the closest museum was an hour and a half away. Her love of dinosaurs was nurtured by her parents, taking trips to the Field Museum and supporting her love of creepy-crawly creatures like cicadas. Don't tell the Museum of the Rockies, but the Field Museum is still her favorite museum!

Ray met Ashley during his fossil road trip with Episode #2's Kirk Johnson (the one that spawned their first book, Cruisin' the Fossil Freeway) at the La Brea Tar Pits. Kirk describes Ashley as a "fossil obsessed person" and coincidentally they met her again one week later while she was working at her other institution, the Raymond M. Alf Museum of Paleontology.

Ashley and her husband Lee Hall (an expert on the Devonian placoderm fish Dunkleosteus) both love dinosaurs so much they had a Jurassic Park-themed wedding, complete with an azhdarchid pterosaur puppet ring bearer! They used Cruisin' the Fossil Freeway as a guide for their paleo-centric road trip honeymoon! Their favorite stop was Dinosaur Diamond where Episode 33's Rebecca Hunt-Foster showed them the Mill Canyon Track Site full of theropod, sauropod and even alligator tracks!

The Halls banded together in 2013 (while wedding planning!) to study sauropod feet. It was known from Lee's previous research with Dr. Denver Fowler that sauropods dug giant trenches where they laid their eggs. Ashley and Lee wanted to test their hypothesis that sauropods may have used their claws to un-mire themselves from mud. After looking at hundreds of muddy sauropod tracks frozen in time from across the world, they found no evidence that sauropods used their claws to help free themselves from these "sticky" situations.

Have you ever looked at sauropod feet? Ashley wants you to look again. Sauropods have very strange "hands," where if you used the human hand as a comparison, most have a full thumb but some strange sauropods like Rapetosaurus from Madagascar lack "fingers" or digits on their front feet altogether!

As a paleontologist and museum educator, Ashley's job is to stay updated on the coolest up-and-coming scientific research and translate it into something the general public can understand at every age. One fun fact she likes to share is that the Museum of the Rockies is home to a very very large coprolite (remember, that's fossilized poop)! Although it's not as big as the iconic pile immortalized in Jurassic Park, it is as big as a truck tire. Stay tuned to see if we get coprolite expert (AKA "Poop Queen") Dr. Karen Chin on the show! ;)

The big 5 of the Museum of the Rockies: T. rex, Triceratops, Maiasaura, Deinonychus and Diplodocus with some additional stars like Big Al the Allosaurus. The Kaiparowits Formation contains Ashley's favorite dinosaur, Parasaurolophus, as well as Teratophoneus, Champsosaurs, Gryposaurus and other creatures that lived along the western edge of the Western Interior Seaway. The star of the Kaiparowits show is Baby Joe, the only juvenile Parasaurolophus that's ever been found. Baby Joe now resides at the Raymond M. Alf Museum of Paleontology in Claremont, California.

Ashley is now an author of her own books, Fossils for Kids and now Gems for Kids published by Callisto Media and purchased wherever books are sold. She's also co-authored a paper with Episode 29's Don Prothero.

Want to join a dinosaur dig? Ashley recommends the Dinosaur Journey Museum, the Wyoming Dinosaur Center, the Montana Dinosaur Center, and the North Dakota Geologic Survey - all great places to start! If you'd like to dig for fossils, it's important that you dig with a museum to make sure all of your incredible discoveries are collected for science!