Dr. Bob Bakker is widely known as the "Dinosaur Heretic". Over his long career, he has revolutionized our understanding of dinosaur behavior and overturned many outdated concepts. Get an insight into the mind of this bold maverick and expansive thinker in our season two finale. 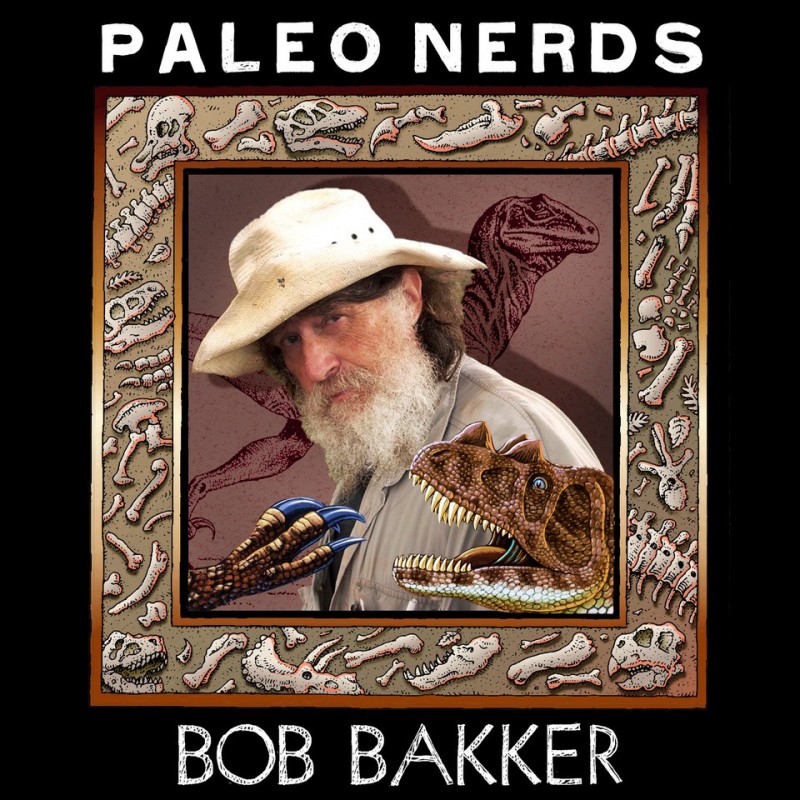 Curator of Paleontology at the Houston Museum of Natural Science

Dr. Bob became interested in paleontology after stumbling upon a Life Magazine containing Zallinger's incredible paintings of prehistoric life. While the illustrations drew him in, he was more impressed by the story of life and the fascinating process of evolution. During undergrad at Yale, he worked as a scientific illustrator and became so skilled that when he needed to hire an illustrator he couldn't afford to hire himself! Early in his college career, he visited the Cloverly Formation in the Big Horn Basin with his mentor John Ostrom.  There, Bob learned how to map a quarry and excavate fossils during Grant Meyer's groundbreaking discovery of Deinonychus.  Bob was the first person to illustrate this spectacular find and the discovery of this site kicked off the Dinosaur Renaissance to which Dr. Bob was central.

Ray put bob in his Fossil Map of the US near the Como Bluffs, also featuring Bob's beloved Titanoides.

The way Bob sees it, evolution takes the standard plan and tinkers with it, sometimes creating just the trick that can lead to speciation and possibly carry a species through an extinction event. This theory of Punctuated Equilibrium was witnessed rapidly by Peter and Rosemary Grant during their work on finches in the Galapagos. Their story is recounted in The Beak of the Finch by Jonathan Weiner.

Bob has always been fascinated by the movement of dinosaurs, arguing that the large beasts were much more graceful than a lumbering lizard as they had previously been presented. Bob prefers to work with artists rather than narrowly-trained PhDs, and Ray agrees that drawing helps him come to a greater understanding of his subjects. Drawing dinos as a kid, Bob looked curiously at the musculature of stegosaurus and imagined how they moved.

Studying the footprints of Stegosaurs reveals that they could (and would) stand on their hind legs, using their front legs to maneuver. Large sauropods would do this as well, standing on their hind legs to reach higher leaves.

Giant herbivores are the most dangerous animals in the world, and the disparity in brain size indicates the ferocious predators of the time were much much smarter than their large prey.  Of course, herbivores come equipped with deadly weapons like Brachiosaurus' whip-like tail or Stegosaurus' spiked tail.  I don't know who I'd rather run into, a conniving Allosaurus or a dim-witted brachiosaurus whipping its tail...

Bob can even see how dinosaurs eat based on the tools they're equipped with. In the Eocene, there's much more damage to prey because mammals eat differently than dinosaurs, thoroughly crunching up their food as opposed to the dinosaurs in the Jurassic who would rip off large chunks of their prey, gulping their food down their sideways-expanding jaws.

The teeth of Nanosaurus AKA "half-a-chicken" proved that this small dinosaur was actually a lizard (Sorry Marsh!). Bob named another small lizard Drinker after Marsh's nemesis Edward Drinker Cope. Bob's involvement in the lore surrounding the Bone Wars between Cope and Marsh is discussed in Episode #24 with Louie Psihoyos.

For the last 30 years, Bob has been tracing the origin of warm blood. Cold-blooded beasts like Dimetrodon are so common in Texas because they're similar to crocodiles, eating only when necessary.  This theory was proposed by "Shorty" Olson, and Bob followed up on this theory by searching for the prey these Dimetrodons were feasting on. He could then see when this predator/prey ratio changed over time. He looked toward the Kazanian (a subdivision of the Permian, named after Elia Kazan), relying on an impressive collection made by Lieuwe Dirk Boonstra, a paleoecologist. Boonstra's statistics showed that carnivores were rare in the Kazanian, similar to the ratios seen in environments where predators are warm-blooded, allowing Bob to draw the conclusion that this is the origin of warm-bloodedness.

Bob's book, The Dinosaur Heresies, gathers all the evidence that dinosaurs are, indeed, warm-blooded.  Although this theory had been developed as early as 1838 by Reverend Edward Hitchcock, it was still met with much controversy.

Shockingly, Bob would time travel to 1916 to speak to the British admiral at the North Sea where the Queen Elizabeth and Warspite battleships were in action and could have defeated the German fleet if someone had told them to adjust their fuses. Dr. Bob draws a similarity between evolution in nature and the evolution of technology, admiring the battleships from World War I as if they are a nearly perfect species slowly tinkering out the minor imperfections to become more effective.

Paleo News: Ray's been feeding his Ravens (not crows!)

The Beak of the Finch by Jonathan Weiner