JP Hodnett is a Paleo Nerd. But that's a given! He's a shark (and sauropod and cat) expert, so the Nerds get to go off the deep end, diving into incredible finds at Mammoth Cave and JP's day job at Dinosaur Park. 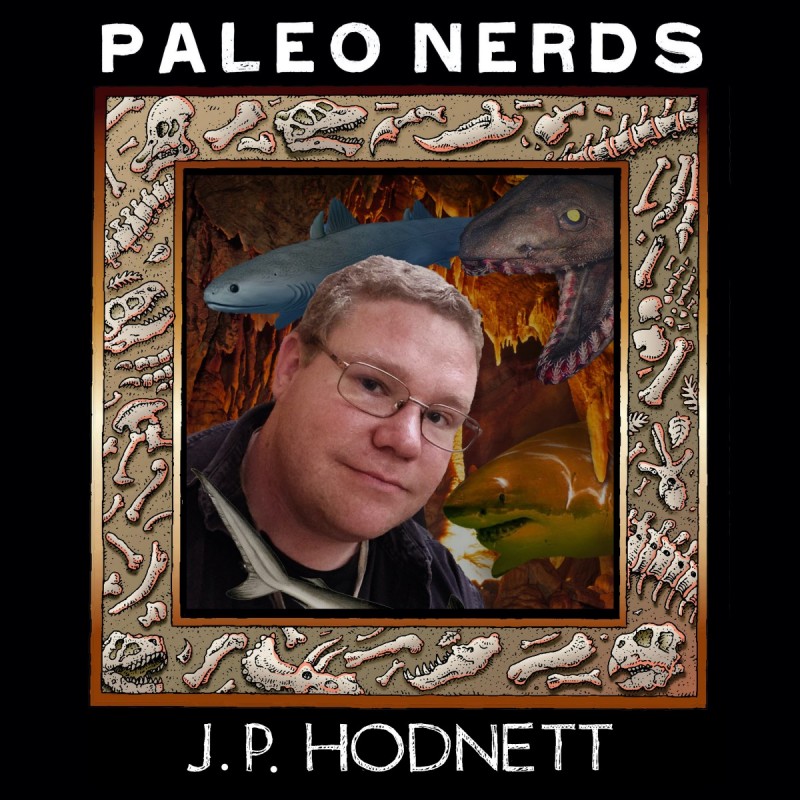 JP Hodnett was born in Germany, but grew up in Tuscon, AZ and he can't remember a time he didn't want to be a paleontologist.  As a kid, he thought there were no cool dinosaur fossils in Arizona until his neighbor introduced him to the Arizona-Sonora Desert Museum and JP soon started volunteering.  There he was introduced to Arizona's own Sonorasaurus and Bob McCord and Gavin McCullough of the Arizona Museum of Natural History took young JP under their wing, taking him to Late Cretaceous lake beds in the Santa Rita Mountains where he was involved in describing the first horned dinosaur from Arizona: Crittendenceratops krzyzanowskii (Say that 5 times fast!).

Ray knows JP as a Paleozoic shark guy, but he's also been known as a fossil cat expert (He started his career with Late Cenozoic predators like Smilodon, Homotherium and Miracinonyx). During his undergrad at Northern Arizona University - famous (to Ray) for its Megactenopetalus kaibabanus specimen - he collected shark teeth in between classes. He also continued to hone his skills as a scientific illustrator with Rich White at the International Wildlife Museum before studying with Richard Lund and Eileen Grogan: the King and Queen of shark paleontology. He worked on a Ctenacanth known as the Godzilla shark from the Bear Gulch Formation, but Ray never let him finish that story!

JP and Ray are both obsessed with Chondrichthyans (the class containing sharks [Elasmobranchids] and ratfish [Holocephalids]) because of how fun of a mystery they are to solve. Because of their cartilaginous skeletons, there's a lot of gaps to fill in the fossil record. Ray is particularly obsessed with Eugeneodontids (like Helicoprion) and has continued the work done by his mentor Dr. Zangerl.

JP's recent work is on Mammoth Cave, a site in Kentucky where specimens with 3D cartilage are preserved! Check out the 3D model of one of JP's favorite sharks, Glikmanius, previously known only from teeth. JP had to crawl almost a mile to get to the incredibly preserved jaw. Some of the specimens preserved in the cave are too dangerous to remove, so JP's crew 3D scans them in order to safely describe them without damaging the specimen or the cave.

JP now works at Dinosaur Park in Maryland where he surface-collects fossils with the public (during non-COVID times, of course). The park is home to the 67-foot Astrodon, a sauropod relative of Brachiosaurus, as well as a plethora of carbonized wood.  JP also spent five years as the coordinator for National Fossil Day, an annual celebration held to highlight the scientific and educational value of paleontology and the importance of preserving fossils for future generations.

Paleo News: Not much to report this week, but if you managed to miss the Baby Shark craze, here's the song.